In the software development scene today, containerisation - and Docker in particular - is hard to ignore. However when an application needs to scale horizontally it falls upon container orchestration systems to handle the complex interconnections between distributed nodes and the containers that they manage.

The Docker networking model is somewhat flexible, offering support for multiple solutions through the use of network drivers. However in the default case Docker imposes a bridge networking model using a host-private networking scheme. Docker creates a virtual bridge, called docker0, in the root network namespace and allocates a subnet from one of the private address blocks defined in RFC1918 (typically 172.16.0.0/12) to that bridge. For each container managed by Docker a virtual network namespace is created to isolate the container from the host networking device. Each namespace is attached to the bridge through a virtual Ethernet device (veth) and mapped to appear as eth0 from within the container. The virtual Ethernet device is then allocated an IP address from the address range assigned to the bridge.

The result of this setup is that each container Docker manages can communicate with all other containers providing they are connected to the same virtual bridge. By extension since the bridge is configured behind the node’s own Ethernet device the containers must also be on the same machine. In addition because Docker is configured to use the same IP address range on every node it follows that containers across nodes may be assigned the same IP address. This makes containers unable to communicate with each other across nodes out-of-the-box.

One way for containers across nodes to communicate it to carefully coordinate the allocation of ports on the node’s own IP address and then forward packets to the respective container. This can be rather errors prone and often lead to high contention.

Below is a diagram depicting how Docker manages virtual network namespaces for each container. From this it can be seen how packets would have to traverse through the virtual bridge to provide connectivity between containers on the same node.

The Kubernetes (IP per Pod) Model

The Kubernetes networking model does not differ much from the Docker model seen above. However Kubernetes demands a flattening of the IP address space, dictating that all containers (and their respective nodes) should be able to communicate with each other without the use of Network Address Translation (NAT). How this is achieved is of no concern to Kubernetes and may likely be implemented differently across infrastructure providers. For instance simple L2 ARP lookups across a switching fabric could achieve this, or alternatively L3 IP routing, or an overlay. Providing this demand is respected Kubernetes should be able to run across a network.

Unlike the Docker model, Kubernetes assigns IP addresses at the Pod level, where by default a Pod is allocated a private IP address within the network namespace address range.

Pods themselves provide an isolated, shared network namespace for their content (containers) meaning containers within a Pod can communicate by making a request to localhost. This consequently means that each container within a Pod must coordinate port usage. However it is typically considered best practice to isolate a single container within a single Pod so this issue tends to be moot. On the occasion there exists one or more containers with a hard dependency on each other they can be placed within a single Pod but should not likely need to contest for unallocated ports.

To demonstrate this I have created a single Pod running 2 containers. The kubectl command prints out the Pods details.

Note The -l options in the following command specifies that only Pods with a tier label set to api should be selected for the output.

The above Pod can be accessed by making a request to its IP address (10.4.2.19). Since the cluster is running on Google Kubernetes Engine (and by extension Google Compute Engine) where by default a Pod is given an internal IP address it can only be accessed from a machine within the same Google Cloud Platform project.

Services are an abstraction of stability for Pods providing a persistent endpoint representing a set of containers behind it. This is achieved with a Virtual Internet Protocol (VIP) address and enables Kubernetes to deal with changes to the cluster topology dynamically without effecting user perceived uptime. Clients now only need know the VIP in order to talk to the Pods behind the Service. This allows for rolling updates where Pods may be completely replaced, likely allocated different IP addresses, without the client realising what actions Kubernetes has taken.

The default implementation of the Service abstraction is the kube-proxy that runs on each node in a cluster. Its main responsibility is to query the Kubernetes API server and configure iptables to forward packets to the correct destination Pods (backends). It is able to configure iptables to perform simple TCP and UDP stream forwarding or round robin TCP and UDP forwarding across a set of backends. Despite its name kube-proxy is not a proxy - once upon a time it was a proxy, now it is a controller. In fact it does not touch the packets traversing the Kubernetes managed network. 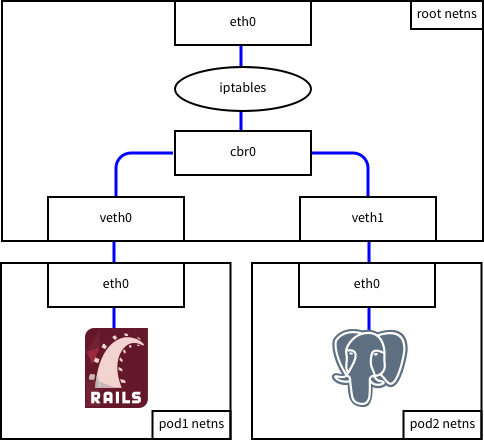 To demonstrate this I have created a Service that creates a persistent endpoint for a single Pod. The kubectl command prints out the Services details.

By logging onto the node managing the Pod (although any of the nodes would produce the same output) we are able to see the list of iptables rules that have been created by kube-proxy.

It is important to note that iptables, in addition to performing a DNAT, also creates a record in the connection tracking table. This allows iptables to track address translations based on a 5-tuple schema later used to reverse the translation when a response is received.

So far we have only seen what happens with a single Pod. However most distributed applications require redundancy, adding further complexity. To demonstrate this I have increased the number of replicas for the Pod from above to 2. The kubectl command prints out the Services details.

Once the new Pod has been created the Service has 2 backends where each Pod may very well be on different nodes. However because of the rules Kubernetes demands these Pods can both talk to one another. When this new Pod was created kube-proxy created new rules in the iptables across all the nodes in the cluster. These rules forward packets to the new Pod when the Service is requested.

Now Kubernetes must make a choice as to which backend to forward packets. iptables will pick one of the backends at random, based on some statistic condition. In this case each Pod has a 50% chance of being selected. From here the process is as before; iptables will perform a DNAT, add a record to the connection tracking table, and forward packets to the destination Pod.

The root network namespace now acts as a distributed load balancer. This is true because the same set of rules are configured on each of the nodes in a cluster, so a Service can be “discovered” in the same way from every Pod, regardless of the node that it runs on.